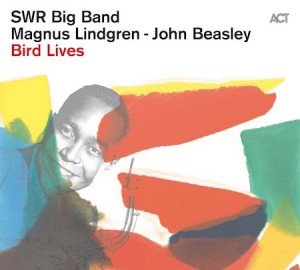 Iconic standards are grouped with Charlie Parker originals on the SWR Big Band’s Bird Lives, with the latter making up more than half the album.

Yet, Bird Lives isn’t meant just as an interpretive homage to Parker’s writing. Nor is it a conservative retreat to established arrangements of well-worn repertoire. Instead, the album’s identity exists between the two.

The majority of the album was co-arranged by Magnus Lindgren and John Beasley, except for two tunes handled by Beasley (“Scrapple From The Apple” and “I’ll Remember April”) and one by Lindgren (“Overture To Bird”).

Tracks are given new personality thanks to the production of Lindgren, the teamwork between he and Beasley and an assortment of solos offered by Tia Fuller, Miguel Zenon, Chris Potter and more.

“Cherokee/Koko’s” nimble melody and bass line; condensed, piercing timbre of the band’s trumpets; and Camille Bertault’s agile scat vocals underline a sense of animated urgency. One could imagine the music behind a bustling chase scene in older spy film or a montage in a lighter satirical comedy.

From there, it becomes surprising to hear “Summertime” so heavily embrace jazz fusion. The layered string introduction leads to synthesizers of varying tonal shapes that mingle with more expectant string flourishes. That said, it’s evident Bird Lives moderates its adventurousness, which ought to keep the displeasure of jazz purists at bay.

“Overture To Bird” thoroughly blends aspects of past and present jazz sound style, in ways meant to best serve the SWR Big Band’s grand sound and collective performative skill. The brief reprise of “Summertime” even shows a variation on the amount of modernization to the beloved song, and for those more traditionally inclined, it’s reassurance of respect for the history sewn into this album.