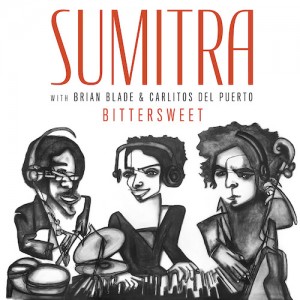 Since 1995, when Sumitra Nanjundan released her first album, the pianist and vocalist has worked as a studio player in London and returned to Vienna where she spent time as a child. For the past 15 years, though, she’s been based in Los Angeles.

Bittersweet, her fourth album as a leader, finds Sumitra’s voice and piano joined by bassist Carlitos Del Puerto and drummer Brian Blade along with occasional fills from her husband, guitarist Alex Machacek. This isn’t exactly a jazz album, and instead focuses on Sumitra the singer/songwriter in a style not too different from Joni Mitchell or Laura Nyro.

Sumitra’s originals include a tribute to her late mother (“Bittersweet”), the story of her first marriage’s dissolution (“Make Me Whole”), the tale of a close friend and other associates who have suffered from mental illness (“Take The Reins”) and how the star culture of L.A. can affect one’s musical relationships (“Recall”). In addition, there’s a modernized, but pretty straight, version of “The Way You Look Tonight,” an adaptation of a Bartok piece (“Funny”) and a drum feature for Blade on “Another Day.” Sumitra has a pleasant voice and her piano complements her music, but very little here distinguishes Bittersweet from countless others.