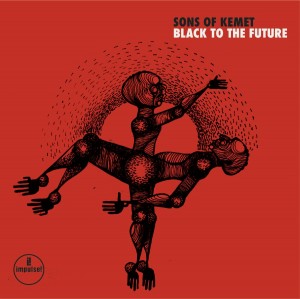 The intersections of music and poetry, jazz and hip-hop, art and popular music always risk the chance of running afoul of one and other. Is it honest or forced? Is it too much or too little? Is it authentic, in the parlance of this day and age? Sons of Kemet’s Black To The Future, led by multi-instrumentalist Shabaka Hutchings, stays pure and true in fusing all of the above. This is the rare piece of art that captures the times — our times — full of confusion, righteous anger and absolute beauty. From the opening lament of “Field Negus” featuring the spoken-word rage of Joshua Idehen, to the closing strains of “Black,” Black To The Future delivers music for the mind, the soul and even the dance floor — sometimes all three at once, as is the case with the danceable-but-deadly truth of “Pick Up Your Burning Cross,” featuring Moor Mother and rising star Angel Bat Dawid. It rivets, shakes and bakes with crazy rhythmic drive. How could it not? For those new to Kemet, we have two incredible drummers in the persons of Edward Wakili-Hick and Tom Skinner, the amazing Theon Cross on tuba and Hutchings on reeds. It’s an exploration of rhythm and low end, as well as a treatise on continued losses of equality and equity. A demand for social justice lies at the core of this recording and this band. Few artists have put as much thought into their music as Hutchings, who has even crafted a mission statement for this work: “Black To The Future is a sonic poem for the invocation of power, remembrance and healing. It envisions our progression towards a future in which indigenous knowledge and wisdom is centered in the realization of a harmonious balance between the human, natural and spiritual world.” That’s just the beginning. But you don’t even need his words to understand where this band is coming from. Sons of Kemet naturally meld jazz with the rhythms and music of Africa, hip-hop and the Carribbean. “Hustle,” featuring Kojey Radical, is a straight-up groove with Radical describing, in chapter-and-verse detail, the “hustle inside me.” “In Remembrance Of Those Fallen” serves as Hutchings’ homage to those fighting for liberation, especially within Africa. There is an intensity to this music that has been missing, in this way, for far too long. Black To The Future speaks a truth that should be heard. But this recording and these artists never forget to move us musically as well as mentally. Hutchings understands that the best way to educate as a musician is to put your message to music. The album’s final volley, “Black,” with spoken word by Idehen, drives the message home: “Black is tired,” he says at the outset, letting all know where he stands with lines like, “This Black pain is dance,” “This Black struggle is dance,” “You already have the world,” “Just leave Black be,” “Leave us alone,” as the music leads into final resolution.