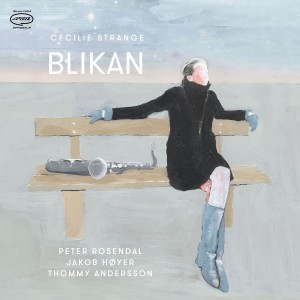 There are so many recordings to catch up on from the dark days of the pandemic, and this is definitely one of them. Cecilie Strange is a tenor saxophonist from Denmark full of rich, thoughtful ideas, as she demonstrated on her 2020 album Blue (April Records). She does so again on Blue’s companion piece, Blikan, released this April.

With Blikan, an old Icelandic word that means to shine or to appear, Strange weaves a beautifully Nordic jazz noir, never hurrying the music, letting it take a pace that is calming, folksy, bluesy and, yes, a bit mystic.

Strange doesn’t try to wow you with technique. It’s there, but she chooses to transfix with her tone, at times hushed and breathy, at time wailing and moaning, but never over the top. Strange and her cohorts on this record and the last consistently choose nuance over throwing bombs.

Speaking of those cohorts, Strange is joined here by Peter Rosendal on piano, Jakob Høyer on drums and Thommy Andersson on bass. She chose them based on what she heard them play in the past. Before recording Blue and Blikan, this group had not worked together.

But work they do, beautifully, as an ensemble, listening, feeling and moving the music forward.

Take, for instance, the lovely “When Sunny Smiles,” written for her sister. It’s a wonderful blues number. As Rosendal solos, Høyer and Andersson comp with such grace and taste, punctuating just the right spots, allowing the listener to experience the full sound of each instrument in incredibly sophisticated ways. You can hear the soul of each musician moving to complete the whole of the group.

The same can be said for each or the six tracks on this record, which is a breath of fresh air. Clocking in at just over 40 minutes, it should be enjoyed in one sitting, like a late-night set from your favorite club, laid down for posterity.