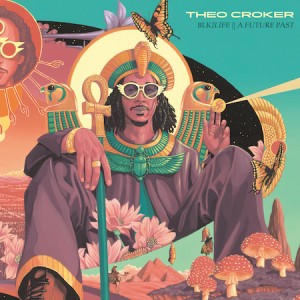 Theo Croker’s sixth album aims to send “coded frequencies to activate our sleeping, ancestral DNA” that bubble up throughout this ode to Blackness. It’s a daring work of psychedelic jazz in which Croker, playing trumpet and flugelhorn, brings together forebearers like saxophonist Gary Bartz, softly resplendent on the lovely “Anthem,” and Fugee Wyclef Jean, militant on “State Of The Union 444,” with futurists like Malaya, the frisky vocalist of “Happy Feet” — and the visionary auteur Croker.

Largely shaped by Todd Carder’s production, Croker’s horns occupy various sonic positions on these 13 tracks. His trumpet can act as a kind of director, pushing from the back on “Lucid Dream,” a showcase for poet/vocalist Charlotte Dos Santos.

Each track has its pleasures, from the biting “State Of The Union 444” to “Imperishable Star,” an effort highlighting Croker’s ability to construct soundscapes both dense and dreamy. What may be the album’s most ambitious track is the heady “Hero Stomp,” where Croker ratchets up the energy with a spiky, argumentative solo. Dubbed, sampled and looped here, Croker can sound like a swarm of bees, and he takes risks, binding human expression to advanced technology. Somehow, it all works, and even as this tune accelerates toward collapse, Croker staves off the looming entropy; keyboardist Michael King has a true solo, which sparkles and unifies.