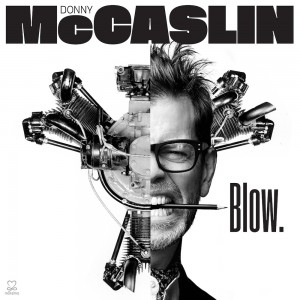 Donny McCaslin’s experience on David Bowie’s final album, Blackstar, continues to shape his work. If 2016’s supercharged Beyond Now functioned somewhat as a howling reflection of his tenure with Bowie, then Blow. can be viewed as more of a snarling celebration of Bowie’s art-rock legacy.

Many of the musicians from Beyond Now return on Blow., but McCaslin places more emphasis on singers and lyrics than his eruptive tenor saxophone improvisations. With themes of political and emotional discontent, the disc blasts off with its biting first single, “What About The Body,” a propulsive rock song on which Ryan Dahle sings of current political unrest in America. Dahle takes the lion’s share of the lead vocals, with his angst-ridden sensibilities setting the tone for the rest of the album.

Jeff Taylor’s rangy, phantasmagoric baritone proves the best of the male lead vocals, as evidenced by the cryptic “Tiny Kingdom” and the frantic “Tempest.” On both, he brings a theatrical spark that manages to steer clear of callowness. But Gail Ann Dorsey’s plaintive alto on the sensual “Eye Of The Beholder” takes top prize for vocal performance, as she articulates the languid melody and existentialism-laden lyrics with soulful conviction.

Blow. might polarize McCaslin’s die-hard jazz fans, but it still has the magnetism to draw a broader audience.