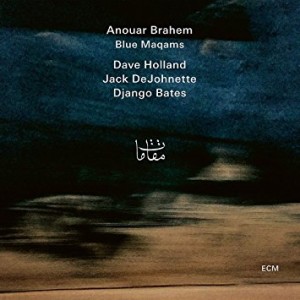 For his intriguing new quartet album, Blue Maqams, master oudist Anouar Brahem enlisted two fellow legends and a veteran player whose profile is on the rise. The lineup for this jazz-meets-world-music program includes bassist Dave Holland (with whom Brahem collaborated on the 1998 ECM album Thimar), drummer Jack DeJohnette and 56-year-old British multi-instrumentalist Django Bates, who plays piano here. ECM founder Manfred Eicher, who produced the album, suggested that Brahem consider working with Bates, whose leader debut on ECM will be out Nov. 3. In the liner notes to Blue Maqams, Brahem explains that he wanted to team up with a pianist who could help him explore new approaches to dialog involving oud and piano. Not only did Brahem find the perfect collaborator in Bates, he assembled a program of all original compositions that showcases the pianist’s gorgeous touch, with some passages featuring solo piano, as well as duo sections that highlight subtle, intelligent conversations between oud and piano. Eicher is a meticulous craftsman, as is Brahem, who describes the producer as “an extremely sensitive sculptor of sound.” The result is a program that features traditional music from Arab culture as well as more modern jazz elements. Each musician shines here. Holland uncorks a sturdy solo on “Bom Dia Rio,” a composition dating back to 1990. DeJohnette masterfully uses his cymbals as the main percussive voice on much of “Unexpected Outcome” and on parts of “La Nuit.” Bates’ beautiful playing on “The Recovered Road To Al-Sham” will certainly win him new fans and send them searching for his leader albums. Brahem will tour Europe in April, with shows scheduled for Paris, Munich and Brussels, as well as other cities.