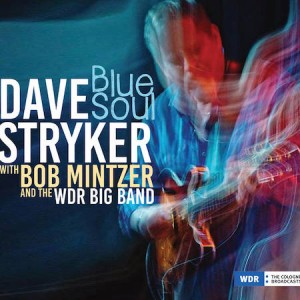 In March 2019, a group of superheroes assembled in Cologne, Germany. Their mission—to record a great album—might not be the stuff of comic-book plots, but in true, Avengers-like form, it was accomplished by accentuating each participant’s unique strengths. Guitarist Dave Stryker teamed up with Bob Mintzer and the WDR Big Band (for whom the tenor saxophonist serves as principal conductor) to record Blue Soul. The result is album that showcases the turn-on-a-dime precision of the large ensemble, as well as the composing and arranging acumen of the two marquee leaders.

Some of the tunes here—two Marvin Gaye classics, Jimmy Webb’s “Wichita Lineman” and Prince’s “When Doves Cry”—will be familiar to fans of Stryker’s series of Eight Track albums, which feature jazz arrangements of old-school pop and r&b tunes. On Blue Soul, the big band adds intriguing textures that enhance the material without blunting the impact of Stryker’s clean, potent guitar lines.

Stryker and Jared Gold’s arrangement of Gaye’s “Trouble Man” spotlights a team of selfless players who value the sophisticated elegance of a big band and the greasy muscle of a small combo. Elsewhere, the duo’s arrangement of “What’s Going On” highlights Stryker’s remarkable ability to craft instrumental lines that evoke the cadence of Gaye’s vocal flights.

The program concludes with Mintzer’s arrangement of Stanley Turrentine’s “Stan’s Shuffle”—a bag of aromatic catnip for lovers of traditional big-band sounds. Thanks to Mintzer’s own reed work, the rendition subtly nods to the melodious playing style of Turrentine (1934–2000), who was once Stryker’s employer. Just like a great Avengers movie, this album could leave some fans fully satisfied, yet also longing for a sequel.