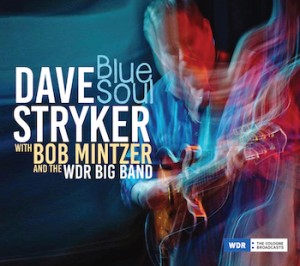 There’s a lot to be skeptical about in this summit of guitarist Dave Stryker, tenor saxophonist/composer/arranger Bob Mintzer and the WDR Big Band. Eight of the nine tunes here appeared on previous Stryker albums, most of them recently; the other is a Mintzer original, “Aha,” whose arrangement hasn’t been at all altered from its initial 2012 recording.

Stryker’s role on “Aha” seems particularly disposable: He doubles the reeds on the written themes and comps some chords during Mintzer’s solo. The pieces from the guitarist’s own catalog don’t make much imagination evident, either. Mintzer puts more verve into Stryker’s three originals than the cover material here, though not enough to carry a full album. Yet, the album does carry, because, dammit, it just sounds so good. Novelty in the orchestral arrangements isn’t needed if you’ve got horns that sparkle like WDR’s; every yelp and holler they offer on Marvin Gaye’s “Trouble Man” makes it that much more engaging, with the undulating reed response giving it a smooth cohesion. It’s all a good and necessary reminder that in jazz, it’s not the material, it’s the people who play it.