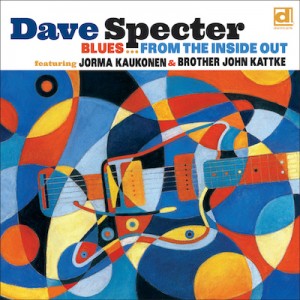 Dave Specter is nothing if not stylish, from his natty attire and cool demeanor onstage to his studio work with labelmates at Delmark’s Chicago studio.

The guitarist’s fretwork on Blues From the Inside Out is even more elegant and sophisticated than on his first 11 rock-solid solo releases for the imprint. This time, though, Specter adds to his arsenal as he steps up to the mic for three turns as lead vocalist. His singing is perfectly adequate, but Brother John Kattke, who gets four turns at the mic, has a more dynamic voice. It’s Specter’s six-string prowess that’s the best reason to spend time with his latest dispatch. It’s also the one constant. Specter is as flashy as he wants it to be, but not to the detriment of the material. He’s a jazzman’s bluesman, so the bandleader brings those chordings and riffs to the mix, too.

The dozen tunes run the gamut, musically: There’s the blues-rock shuffle of the title track; the Professor Longhair-inspired bayou blast of “Ponchatoula Way”; the soul anthem “March Through The Darkness”; the wah-wah driven funk of “Sanctifunkious”; the r&b-flavored instrumental “Minor Shout”; and the Latin-tinged “Opposites Attract.”

His guest on two tunes, Jorma Kaukonen, of Jefferson Airplane and Hot Tuna fame, is a perfect complementary guitarist. There’s never a shortage of fine supporting artists on Delmark recordings, and Specter’s production and Steve Wagner’s engineering lead to a crisp, clean sound.