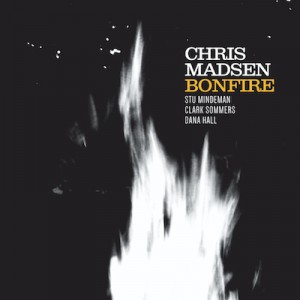 Chris Madsen’s compositions delve into balladry, the blues and a modernism that edges on the abstract—but remains accessible. The tenor saxophonist knows how to gin up tension, and, as the sequencing of this substantial album proves, he also knows the value of release. Bonfire, with its connotations of community, celebration and risk, is an apt title for this Chicago group’s engaging work.

Madsen and his cohort (pianist Stu Mindeman, drummer Dana Hall and bassist Clark Sommers) don’t abide by conventional head-solo-head structure. Rather, they play off each other conversationally. But Madsen just digs diverse grooves: Listeners get the lanky title track, the furious “Lone Wolf” and “It Is All Of Value,” an intriguing work where Madsen asserts himself, blowing low and saucy. The album’s focal point is “Hundred Center,” a ballad featuring the leader at his most relaxed and Mindeman at his most expansive. The finale is “Cellar Door,” a ballad that starts on a bluesy note and builds to a liberating, genre-free pulsation. Madsen’s straightforward tone takes on unusual warmth, Sommers gets a star turn, and Mindeman and Hall—as much colorist as timekeeper—throw off sparks, taking this ambitious album out on a satisfying note.