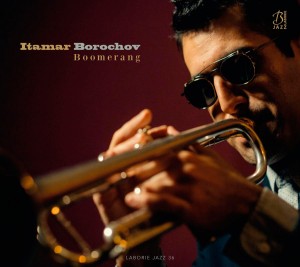 Known equally for his work as a jazz and world musician, trumpeter Itamar Borochov returns to the jazz quartet format with his sophomore album as a leader, following Yemen Blues’ INSANIYA (Magenta Marketing Inc., 2016). But just because this album has a jazz focus doesn’t mean his world-music background loses its place in his voice, a unique hybrid of the Middle East and Brooklyn, compelling technique and delicate lyricism. Two of the tunes are powerful arrangements of traditional songs, and throughout the album, rhythms and harmonies rooted in the Middle East peek through, making for an album as tied to contemporary jazz as it is to Borochov’s cultural roots. While it may seem light and easy to listen to at first, Boomerang is much more religious than one might expect a jazz album to be. The album stands out because of this, especially due to its conceptual and musical representations of the Jewish faith. As the liner notes (by writer and educator Aryeh Tepper) state, the nine songs here take the listener on a journey through the world, Borochov’s life and spirituality. If you decide to follow, your own life can be enriched with a connection to Borochov’s music that goes beyond a mere appreciation for his virtuosity and thoughtful composition.