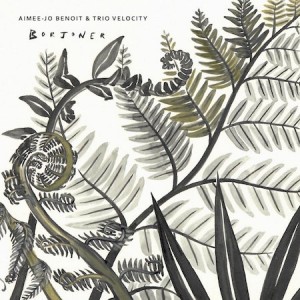 The success of an interpretive vocal jazz album often hinges on two elements: the quality of the arrangements and the depth of the singer’s connection to the material. Such is the case with Borjoner, a charming collection of 10 covers on which Calgary-based singer Aimee-Jo Benoit showcases her love of Canadian tunesmiths. Although the decisions to interpret Joni Mitchell’s “This Flight Tonight” and Jane Siberry’s “One More Colour” are far from revolutionary, Benoit excels by spicing in deft scat-singing on the former tune and rescuing the latter tune from the synth-soaked trappings of the composer’s 1985 hit single.

The aforementioned tracks are quite compelling, but Benoit and Trio Velocity—pianist Sheldon Zandboer, bassist Simon Fisk and drummer Robin Tufts—reap greater rewards when they explore 21st-century tunes by fellow Canadians. A version of Feist’s “Lonely Lonely” features rumbling drums, haunting cymbal swells and delicate piano lines that dance in tandem with the singer’s shifts in pitch. Fisk’s mesmerizing, 80-second bass solo and Benoit’s wordless vocals enliven a reading of “Repetition,” penned by Michael Feuerstack (aka Snailhouse). A rendition of “Exquisite Corpse” (by Chris Brown and Kate Fenner) illustrates how Benoit and her bandmates can show off their chops and still eschew any grandstanding.

Reshaping pop-rock material through a jazz aesthetic and improvisational flights results in sparkling gems throughout the band’s debut album. Looking beyond Canadian borders, the musicians deliver superb versions of The Beatles’ “Norwegian Wood,” Nirvana’s “All Apologies” and the standards “Midnight Sun” and “Alfie.” The word borjoner is an Old French term that translates as “to put out buds.” With this album, Benoit has planted the seeds for what one hopes will become a lengthy discography.