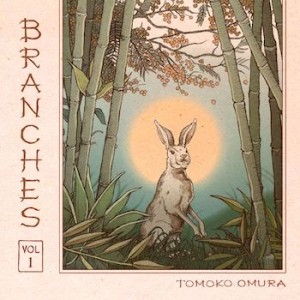 There’s a promise inherent in contemporary music, and it goes something like this: With people from various backgrounds—culturally, ideologically, religiously, aesthetically—creating art, everyone can benefit from the exposure to new ideas.

Violinist and bandleader Tomoko Omura delivers on that guarantee, forging jazz compositions on Branches, Vol. 1 from narratives handed down through Japanese folktales. There’s a light blues affiliation inherent in the work found here, but it’s so endlessly enhanced by reading the short narratives included with the album’s liners—witches, monks, precocious kids, imperious rabbits intermingle—it might be tough for listeners not to wish for a book of the stuff accompanied by Omura’s vital violin.

“Three Magic Charms,” the first musical narrative included here, is all airy contemplation, Omura’s melody floating atop Jeff Miles’ guitar effects. When the mountain witch eventually shows up and starts pounding on the door, you can tell. The tale related on “The Revenge Of The Rabbit,” maybe the darkest narrative Branches enfolds, is no less engaging, the bandleader ceding the spotlight to pianist Glenn Zaleski for a solo as descriptive as any chapter in a book.

Based on the story of Princess Kaguya—also rendered as one of the most expensive Japanese films to date—Omura sketches “Return To The Moon” as a lament, depicting a space-bound royal leaving behind familiarity and memories to head home. Reaching the end of Branches Vol. 1 is just about as difficult.