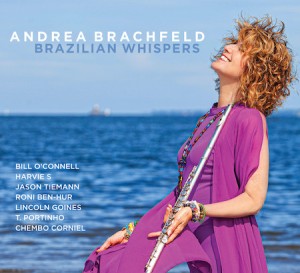 Courageous redecoration often is a valuable stance when updating classics. I’d never imagined Antônio Carlos Jobim’s “Waters Of March” as a shuffle until spinning this salute to the maestro’s book by flutist Andrea Brachfeld. The signature esprit of Brazil’s samba/bossa nexus gets its due, but a feisty groove dominates her band’s rendering, and by the time they reach full speed, the March of the title is more “in like a lion” than “out like a lamb.” In fact, its propulsion almost makes it a military march.

That kind of unique slant doesn’t define all the pieces here, but the craft Brachfeld’s outfit brings to the table makes many of the tracks ripple with laudable precision. In the album notes, the leader wrote that their chemistry as a working unit has deepened; the program supports that notion. Coordination dominates, and the group-—pianist Bill O’Connell, bassist Harvie S and drummer Jason Tiemann are at its core, though another rhythm section holds sway on about half the album—provides plenty of supple turns and sympathetic unity. That makes jewels such as “Amparo,” where they’re joined by guitarist Roni Ben-Hur, essays in tender decorum.

The deft alignment sustains itself when they break from Brazil, too. “Never Let Me Go” is a farewell to Roy Hargrove that brims with sensitivity. Like the Brachfeld/O’Connell original “Triste E Solitaria,” it’s built on an enviable poise that reveals deeper interests, while still being informally entertaining. Come to think of it, that description fits the entire record.