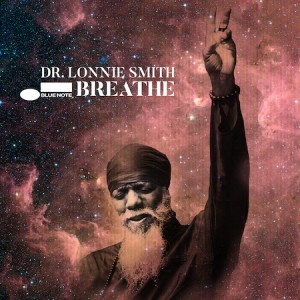 The stylistic parameters of “organ jazz” are so cemented at this late date, it’s easy to believe that gritty grooves and churchy exclamations are the sole elements of a B-3 outfit’s presentation. The aesthetic of 78-year-old Hammond maestro Dr. Lonnie Smith includes those essentials of course, and has from the get-go: Just check out the offhand fervor of his spin on Little Walter’s “My Babe” from his 1967 debut, Finger Lickin’ Good Soul Organ. But Smith usually has something up his sleeve when it comes to enhancing the predictable approach of greasy vamps and swinging funk, and this live album has a handful of gambits to further the hopped-up soul strut expected from the form.

Recorded at New York’s Jazz Standard in 2017, a bandstand immediacy courses through Breathe. The shows were part of a 75th birthday bash, and wisely the good doctor surrounded himself with a feisty horn section. The expanded palette widens the music’s scope. Frenetic blasts of punctuation, like those that adorn “Track 9,” are so fierce, it’s easy to forget this is an organ record. John Ellis, an extraordinarily expressive saxophonist, tears it up on tenor, and then trumpeter Sean Jones and bari saxophonist Jason Marshall throw gasoline on his fire. For nine minutes, it sounds like Tower Of Power at The Plugged Nickel.

The set’s ballad is “World Weeps.” While managing to wax both ominous and vulnerable, it delivers opportunities for guitarist Jonathan Kreisberg and the leader himself to develop valuable thoughts in a rather short time frame. The precision of the band’s interplay shines here, and both solos build incrementally, calibrating drama with an expert touch. The act of patiently unpacking an idea just might be Smith’s superpower. Dynamics rule, mere titillation is banished.

That doesn’t mean the music isn’t fiery. “Bright Eyes” and “Too Damn Hot” can be both buoyant and boisterous—refinement is central to the equation, especially when drummer Johnathan Blake nurtures a series of syncopation tacks on “Epistrophy” (he, in fact, burns throughout the program). Even the hymn featuring vocalist Alicia Olatuja is sparked by an enviable ardor.

The true surprises on Breathe are the disc’s bookends, two studio features by Iggy Pop that find the rock icon trading his “TV Eye” yelp for a plush bari murmur. Timmy Thomas’ “Why Can’t We Live Together” is as slinky as one might hope, and Donovan’s “Sunshine Superman,” in the organist’s book for about 50 years, delivers the shrugged-off savvy that’s long been key to Pop’s persona. Oddly, they integrate nicely with the live tracks. “Everybody’s hustlin’ just to have a little scene,” purrs Iggy. Dr. Smith has definitely found his.