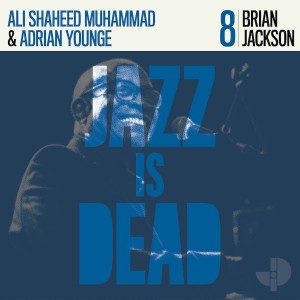 Brian Jackson JID008, the latest offering from Ali Shaheed and Adrian Young for Jazz is Dead, is steeped in the scintillating energy of opposites. The album’s eight tracks reflect this coincidental coalescence with multi-instrumentalist and composer Brian Jackson, through Shaheed and Younge’s rising record series. Jackson’s wisdom and budding enthusiasm as a solo artist made him the ideal candidate for the collaboration.

Every facet of Brian Jackson JID008 exemplifies something Jackson uniquely contributes to the album. Appreciation for other artists comes through directly in homages like “Nancy Wilson.”

“Bain De Minuit” gives respect indirectly — but with no less sincerity — by channeling parallel instrumental and melodic energy: A gentle Rhodes line and inclusion of ample open space evoke sentimental echoes of Jackson and Heron’s work on pieces like “A Very Precious Time.”

Songs like “Under The Bridge” play with textural sounds, including shakers and well-timed Rhodes high notes seemingly emulating bells of passing trains.

These subtleties show Jackson creating from a lighthearted and imaginative place, unburdened by any self-imposed pressure from his ingrained reputation. Brian Jackson JID008 is the best of both worlds: a record inspired by thoughts of the future and informed by experiences of the past.