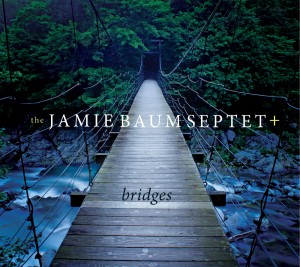 The compositional atmosphere flutist Jamie Baum has created on Bridges is a mystifying thing.

For her fourth album with the septet that appears here, her sixth overall as a leader, Baum investigates commonalities in the seemingly disparate musical practices in Jewish culture, of Southern Asia and the melodies of the Arabic maqam. It’s a heady premise, one fraught with potential pitfalls, but with a generous composer writing for an ensemble with whom she’s well acquainted, Bridges offers several distinct moods during nine pieces, three of which comprise The Shiva Suite, the program’s centerpiece.

Following three slow-brewed tracks, splashes of dissonance interrupt the first portion of that suite—aptly titled “Earthquake”—before the band moves into knotty compositional territory and a calm conclusion on “Contemplation.” A grandiose guitar detour distracts a bit from the overall tenor of the album on “Joyful Lament,” centered on a melody borrowed from Pakistani vocalist Nusrat Fateh Ali Khan’s “Lament.” But the aural distinction also serves to reinforce Bridge’s premise: the connection of different cultures into a singular experience.

It’s to her credit that Baum infrequently makes herself the focus of the ensemble here, reinforcing the compositional goal that Bridges is based upon; she leaves plenty of room for Navin Chettri’s tanpura, vocals contributed by the troupe’s trumpeter, Amir ElSaffar, and sundry percussion. Whatever the reason, it’s refreshing to hear a leader be so convinced of her music’s purpose as to allow ensemble playing and the interaction between these cultures to be the fulcrum on which the entire album swings.