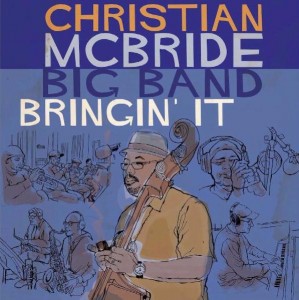 In the press materials for bassist Christian McBride’s new big band album, he cites bandleaders Duke Ellington and Maria Schneider as strong influences on his large-ensemble work. McBride’s artistic debt to those two musicians reflects his desire to be part of a jazz tradition while also pushing it forward. His 2011 big band album, The Good Feeling (Mack Avenue), generated rave reviews, and most of the players on that album are back for Bringin’ It. McBride has said, “[L]ike Duke Ellington used to do, I can write for my guys because I know their sound and style.” Nine of the 11 tracks here were arranged by McBride, who included three original compositions in the program. (All three are songs that he had previously recorded with a smaller ensemble, so it’s clear that he wants to continue refining his acumen as an arranger.) A judicious yet bold arranger, McBride knows exactly when he or one of his trusted bandmates should inject a solo into a tune. Trombonist Michael Dease offers a growling, greasy solo on the McBride original “Used ’Ta Could,” a party tune so addictive that it should be accompanied by a warning label. Carl Maraghi’s baritone sax solo adds some mighty muscle to a winning rendition of Wes Montgomery’s “Full House.” On a lovely arrangement of “In The Wee Small Hours Of The Morning,” the leader’s tasteful arco work and Brandee Younger’s harp add intriguing textures, as though McBride is telling the listener, “I have a lot of dazzling colors on this palette, and I know how to use them properly.” The album concludes with trombonist Steve Davis’ arrangement of his own composition “Optimism.” It’s a toe-tapper incorporating surprising twists and shifts, spiced with Todd Bashore’s arresting alto sax solo and Davis’ fluid trombone solo. McBride is a busy, multifaceted artist who’s constantly juggling projects, and the release of Bringin’ It gives his big-band fans a reason to celebrate.