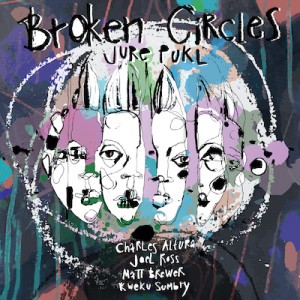 Tenor saxophonist Jure Pukl’s Broken Circles is a fine, accomplished recording that doesn’t put its best foot forward. Its opening track is also the most off-putting: “Sustained Optimism” is a jumble of complex meters, unpleasant harmonies, abrasive melody and even more abrasive improvisations from the bandleader, vibraphonist Joel Ross and drummer Kweku Sumbry.

One can be forgiven for approaching the rest of Pukl’s followup to 2017’s Doubtless with caution.

Fortunately, it’s all a ruse. The remainder of Broken Circles consists of sophisticated but enjoyable music. The quintet enjoys great chemistry, especially in its front line of Pukl, Ross and guitarist Charles Altura. “Gloomy Sunday” finds the guitar and vibes locking keenly into each other as the former solos and the latter accompanies, then vice versa. The pair then nests together for Pukl’s pointed bass clarinet improv.

That said, Altura’s work as rhythm-section liaison is hard to dismiss. His mesh with Sumbry and bassist Matt Brewer on “Sky Is The Limit” is sublime. And on the breezy “Triumph Of Society,” he converges with Brewer in particular, holding the carefully colored chords while Brewer dances and tosses in smart substitutions against Ross and Pukl’s traded choruses.

Nor are the drummer and bassist slouches at improvisation: Sumbry puts masterful suspense into his workout on “Triumph Of Society,” moving through chatty cadences on cymbals, bouncing accents off contributions by Ross and the bandleader before rumbling into a feature section of his own. And Brewer, a member of The SFJAZZ Collective since 2018, takes two of the album’s best solos: an inquisition on “Separation,” an already somber and musing piece set to a funeral-march rhythm, and a foreboding-laced run (perhaps because it paraphrases the Jaws theme) on “Bass Intro.” The latter segues into “Half Past Five,” which doesn’t bear out the foreboding (though it adds some of its own). It does, however, contain highlight solos from both Pukl and Ross, as Sumbry continues beating out surprisingly funky accompaniment that both enlivens the track, as well as urges on his bandmates.

All of which is to say, the unappealing hurdle of Broken Circles’ opening can be overcome. Indeed, as if to compensate for that initial misstep, Pukl and company provide a double barrel of cuteness and tenderness on the exquisite “Kids,” replete with a brief melody snatched from the “ABC” song pretty much every American child has learned.