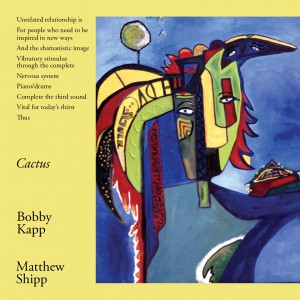 The not-so-well-known veteran drummer Bobby Kapp became active in the 1960s, playing with saxophonists Gato Barbieri and Noah Howard. Pianist Matthew Shipp has attained a similar veteran status, but his output has been way more prolific. Recorded at Systems Two in Brooklyn, this duo debut highlights an exposed meeting between these empathetic players.

On the opening “Overture,” Shipp follows a linear path, but its trajectory is always darting about, switching speed and direction. It’s filled up with sideline ornamentation and littered with sudden detouring embellishments. Kapp works here with cymbals, lightly dancing beside Shipp, who slams dark clusters, simultaneously delivering right-hand rivulets. Kapp is airy, but efficiently targeted.

There is a continual restless change afoot, even within each piece, due in part to Shipp’s nervy dominance. Nevertheless, Kapp follows quickly, and in deep sympathy. Shipp opens “Before” with a conventionally walking bass line, and “Money” has an odd, bluesy swing. The song straddles traditions, gradually breaking apart to gain greater space. Shipp burrows under his lid for harp-like shivers, as Kapp continues his perpetual abstractions. Even if Kapp isn’t using brushes, his skimming circulations always sound feather-light.

“Snow Storm Coming” is not really a track at all, more of a conceptual statement (its total length is listed at 00:00). A hammering, pugilistic bass overtakes “Drum-A-Phone” with big sustain, opening up to some lighter spaces. It’s a nice lead into the halting plod of “The 3rd Sound.”

At just over an hour, the soundscape elements sometimes sound too stretched, with a certain aura of re-visitation, but this album remains a sensitive dialog between two highly articulate speakers.