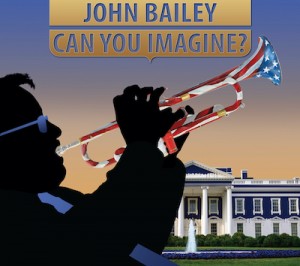 With another election year upon us, trumpeter John Bailey recognizes that the time for a unifying candidate has come: Dizzy Gillespie. Playing off the maestro’s witty 1964 presidential campaign (during which the trumpeter imagined a cabinet that, among other jazz luminaries, included Duke Ellington as Secretary of State), Bailey is inspired by the very real issues Gillespie faced during the Civil Rights era and, in assembling this response, how much more work there is to do.

Given that kind of mission, it’s no surprise that the record’s immediate standout is the three-part “President Gillespie Suite.” In addition to providing a platform for Bailey’s taut runs, the piece builds out of a sauntering groove from drummer Victor Lewis before giving way to a growling turn from bass trombonist Earl McIntyre that clears a path for each player to move toward a harmonious and increasingly raucous statement. Later, Bailey pays tribute to Gillespie’s rechristened seat of power with “The Blues House,” a hard-swung venture marked by a zig-zagging turn from trombonist Stafford Hunter.

Though inspired by contemplation of scant changes since Dizzy’s day, Bailey has delivered a collection driven by the pursuit of light. That’s a campaign anyone can get behind.