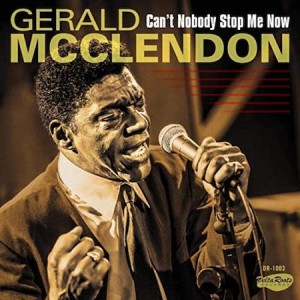 Soul singer Gerald McClendon has found a fine collaborator in Twist Turner. The two musicians had worked together before, but their partnership reaches new heights with Can’t Nobody Stop Me Now. Turner played drums on the album, composed all 12 of its tracks and recorded, produced, mixed and mastered the sessions at Delta Roots Sound Studios in McClendon’s hometown of Chicago. Blessed with a voice that exudes grit and swagger, the singer operates in the tradition of departed Windy City icons such as Otis Clay and Tyrone Davis. The lyrics to the album’s domestic drama “Cut You Once”—a frightening yet comedic tale of infidelity—seem to name-check Davis’ 1970 hit “Turn Back The Hands Of Time.”

Turner’s compositions focus on interpersonal relationships (often troubled ones), and episodes of sneaky infidelity emerge on numerous songs here, including “Where Do We Go From Here” (featuring Skinny Williams’ wailing, pleading tenor saxophone), “She Don’t Love Me Anymore” (anchored by Art Love’s muscular bass lines) and “Runnin’ Wild,” which is fueled by Stax-style horn charts and barbed lyrics: “Tippin’ in at 6 a.m./ Stayin’ out all night long/ Whatcha been drinkin’/ Your breath is stinkin’/ Your clothes ain’t fittin’ you right.”

The dynamic duo of McClendon and Turner isn’t trying to reinvent the wheel here, but with so many of Chicago’s soul stars now singing in the celestial sphere, it’s comforting to know that their legacy is being extended. With this potent program, McClendon vividly illustrates why he has earned a suitable nickname: “The Soul Keeper.”