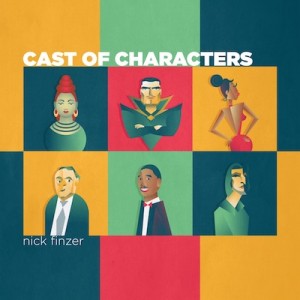 When releasing a narrative album without vocals, many artists include extensive liner notes that explain the story. Trombonist Nick Finzer takes a different tact on Cast Of Characters. The album cover features Laura Reyero’s colorful illustrations of six characters, at least two of whom are real-life figures: Brutus (the Roman senator who helped assassinate Julius Caesar) and Duke Ellington (dubbed “A Duke” here). Instead of describing a narrative arc, the album packaging includes a short essay that begins, “Each of us responds and develops along our journey with the influence of people we meet along our path.” On the interior CD panels, the 14 tracks are divided into two categories: “The Cast” and “The Journey,” inviting listeners to view some songs as biographical sketches and others as plot points.

Looking closely at the back cover of the CD, listeners learn that certain “Journey” songs are associated with specific characters, so the sophisticated swinger “A Duke” is followed by the thrilling “(Take The) Fork In The Road,” the title of which might nod to Ellington’s “Take The ‘A’ Train.”

While these narrative and graphic elements add levels of meaning to the listening experience, the music is strong enough to stand on its own. The quality of this sterling recording is no surprise, given the credentials of producer Ryan Truesdell and the impressive cast of musicians that Finzer assembled: Lucas Pino (reeds), Alex Wintz (guitar), Glenn Zaleski (piano), Dave Baron (bass) and Jimmy Macbride (drums).

“Patience, Patience” dramatically builds to an explosive climax in which all the players, especially Wintz, are hurling clusters of sparks. “Evolution Of Perspective” features kinetic solos from both Finzer and Zaleski, sandwiched between intoxicating segments in which languid horn charts are juxtaposed with Macbride’s skittering drum work.

Finzer, who runs a label and media company called Outside in Music, had the recording sessions filmed, and at press time had posted three clips of live-in-the-studio performances, including “The Guru,” featuring Pino’s potent work on bass clarinet. These videos add yet another layer to our appreciation of this exquisite program.