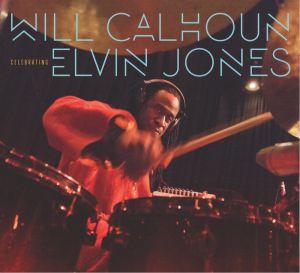 Best known for his role in the fierce and politically incisive rock band Living Colour, Will Calhoun is a drummer whose razor-sharp technique and elastic rhythmic feel defy the bounds of genre. His astounding discography reads like a catchall bin at the record store, with sideman credits for artists as diverse as Herb Alpert and Run-DMC. But for a drummer of such immeasurable rhythmic variation, he can also lay down an undeniably gut-wrenching swing beat. That’s a characteristic he shares with one of his heroes, Elvin Jones, to whom this album is dedicated. Celebrating Elvin Jones is an inspired project, vibrant and emotionally honest, but its greatest success may be that it brings Calhoun’s boundless energy to lesser-known gems of the Jones songbook. Tunes like “EJ Blues,” with its explosive drum fills, “Saramastah,” with its sensitive brushwork, and “Whew,” with its trenchant swing, help paint a portrait of Jones through suggestion and homage, rather than emulation. That’s an artful approach, and Calhoun is wise to have followed it. He’s joined here by a commanding ensemble with bassist Christian McBride, saxophonist Antoine Roney, keyboardist Carlos McKinney and trumpeter Keyon Harrold, all of whom bring depth and dimension to the punchy arrangements. The group is augmented on several tracks by guest stars with connections to Jones’ musical legacy. Czech keyboardist Jan Hammer, a member of Jones’ trio for On The Mountain (1975), joins the band for a propulsive take on “Destiny,” and Senegalese percussionist Doudou N’Diaye Rose, a stylistic ancestor to Jones who died in August 2015, contributes a masterful solo on “Doll Of The Bride.”