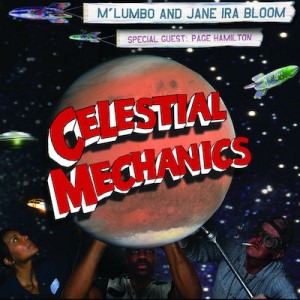 The use of spoken-word samples as a sonic or thematic element in music has a rich history, and has risen to impressive heights with David Byrne and Brian Eno’s My Life In The Bush Of Ghosts and Jason Moran’s “Ringing My Phone (Straight Outta Istanbul).” But overdone, samples can grow as stale and cloying as a comedy routine. And used with as much abandon as M’Lumbo displays, the technique can overwhelm the music and turn cacophonous.

Cacophony is a polite word for pieces like “Grand Funk Railroad,” one of several live cuts on Celestial Mechanics. There are so many intersecting components—more than a dozen musicians and various samples—that it’s difficult to determine a single dominant musical motif, and the sound mix is so muddy that the result seems like an audience bootleg. The use of that venerable power trio’s name as a title also is about as sophisticated a joke as Frank Zappa’s “Don’t Eat The Yellow Snow.”

In another nod to the ’70s, the ensemble tackles the theme to the TV detective drama Hawaii Five-O, which is launched by what sounds like a sample of Lon Chaney Jr.’s Wolf Man character, before steering briefly into the Morton Stevens title song. The theme shifts toward a bossa nova feel—albeit shattered by multiple samples, including some random maniacal laughter. But there’s no unifying concept or solos. A similar approach is applied to a 15-minute version of the theme to the TV show Sesame Street, with Joe Raposo’s song appearing only briefly and serving as a jumping-off point for a jumble of disconnected musical gestures and half-realized ideas. The most developed of these is a short-lived bleating flute, unless you count the repeated appearance of John Lee Hooker’s voice, reminding listeners that he’s the Boogie Man.

So, what is Jane Ira Bloom—she of crystalline soprano saxophone tone and an interest in expressing the beauty of abstract art and the solar system—doing here? It’s difficult to tell, considering how buried she usually is in the bombast and bombardment of one-line interjections. Her most notable contribution is a bluesy flight on an otherwise plodding version of Thelonious Monk’s “Crepuscule With Nellie,” which opens with two minutes of meandering percussion and electronics before getting to the timeless melody.

If M’Lumbo has an antecedent, it might be The Residents—the mysterious art-music group rumored to have its roots in mid-’60s Louisiana. But while The Residents were never less than sharp-edged in their musical pastiches and postmodern sendups, M’Lumbo dulls its impact with half-cooked satire, compositions that fail to evolve into anything of interest and a sonic blend that sounds like mush.