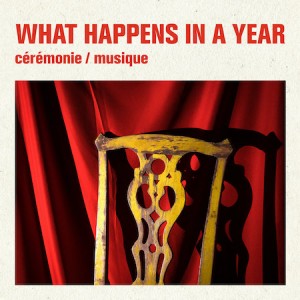 What Happens In A Year

This debut recording from Josh Sinton’s collaborative trio What Happens In A Year is a completely improvised affair, a collection of spontaneous compositions recorded in the close quarters of Oktaven Studio in Mount Vernon, New York, back in 2018.

Featuring Sinton on baritone saxophone and bass clarinet with guitarist Todd Neufeld and electric bassist Giacomo Merega, cérémonie/musique is, as its title implies, ceremonial in essence, the product of weekly get-togethers dedicated to creating new music in the moment. Sinton originally intended the products of their improv summits to serve as fodder for written compositions with predetermined melodies and set forms, but soon realized that the music they’d been making was already perfectly valid in and of itself. It’s a new tack for Sinton, a prolific composer who leads multiple groups and long has played a vital role on Brooklyn’s creative music scene.

The work on cérémonie/musique is hushed and never rushed; listening to the album’s seven tracks gives a feeling of strolling through an art gallery or botanic garden, taking in the surrounding beauty and coming upon each breathtaking surprise at one’s own pace. It breathes easily and conveys a sense of spaciousness that’s the antithesis of the chaotic, frantic sounds associated with so much New York-style “free” playing. Each track is an intimate conversation, from the interval-centered opener “la politique des auteurs” to the drifting sonic textures of set-closer “music from a locked room.” With cérémonie/musique, Sinton and his collaborators have transformed a shared ritual into a collective work of art.