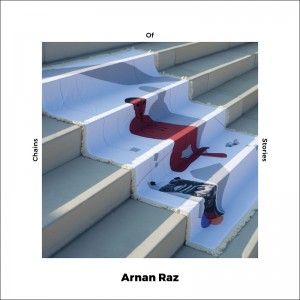 The exquisite corpse apparently was a part of Arnan Raz’s childhood frivolity in Israel. The tenor saxophonist used the game’s underlying concept—where one person starts drawing a portrait, then passes it along to a friend, who adds to the work without being privy to what’s initially been scribbled down, and the process is repeated until the drawing is complete—to create his new album, Chains Of Stories. This approach offers a weird form of indeterminacy: John Cage would approve. What’s surprising, though, is how cogent Chains Of Stories sounds.

Arriving two years after Raz’s debut as a bandleader, Second To The Left, this new album is a sonic continuation, illustrating the saxophonist’s growth as a melodist. Both albums adhere tonally to a contemporary sound clearly indebted to West Coast cool. But whereas Raz’s melodic intentions occasionally needed to be shoehorned into the proceedings on that earlier album, here the material coheres gracefully.

However genteel most of this disc is, a nasty bit of saxophone—akin to something Charles Mingus might’ve coaxed out of Eric Dolphy—erupts on “Two Worlds One Soul,” then quickly subsides. It’s the surprising moments that make Chain Of Stories so compelling. Raz displays a noteworthy confidence here and throughout the album, both as a composer and as a bandleader with a vision.