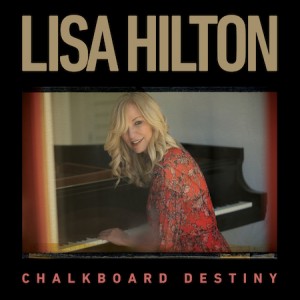 Since 1997, pianist Lisa Hilton has released scores of records under her own name, a one-woman factory of sound. And yet, despite her staggering output, she remains somewhat under the radar of the broader jazz-listening public.

On Chalkboard Destiny, Hilton plays alongside some frequent collaborators: tenor saxophonist JD Allen, bassist Luques Curtis and drummer Rudy Royston. Hilton’s approach on each song, for the most part, is to build on a motif that she then recasts and reinterprets as the tune progresses. Her compositions aren’t so much whistleable melodies as they are cubist suggestions of melodic shapes—as on the frenetic opener, “Rush Hour Rhapsody,” which wastes no time getting right to the point. Hilton often plays in the lower register of the keyboard, offering deeply rhythmic and bluesy patterns. On “Blue Boy,” she sounds like a folk musician à la Carole King; and on “Café Au Mojo,” she sounds like she’s performing barrelhouse piano at a saloon.

Hilton’s chords are dark, watery and mysterious, and she has a tendency for pentatonic runs, spraying blue notes all over the place. But her style doesn’t seem disingenuous or trite, as it would from a lesser pianist. When Hilton channels the blues, it feels entirely appropriate.