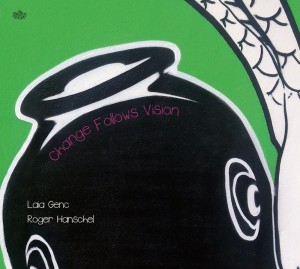 The tunes span Genc’s romantic “Nazmiye,” Hanschel’s rigorous and plaintive title track, his swirling, aspiring “Begebenheiten I” and Genc’s “Zwischenträume,” during which the musicians conjure people taking steps between rain drops. At times, the two seem like competitors bent on racing each other to the finish. On Hanschel’s “Personal Dharma,” which starts slowly but accelerates, his tone lights the path toward a sparkling—and too-rare—Genc solo. A matter of stops and starts, a kind of duel, the tune is exciting, the two mocking each other as they vie for the same patch of footing. But the album’s outlier is Hanschel’s “Interlude,” a staggering display featuring the saxophonist’s mastery of staccato, circular breathing and what might be called power surges. Backed by a subtly percussive Genc, Hanschel stalks and wrestles himself here, bringing a strikingly muscular approach to a melody at the brink of bursting. Chamber jazz of a high order, this recording effortlessly blends discipline and drama.