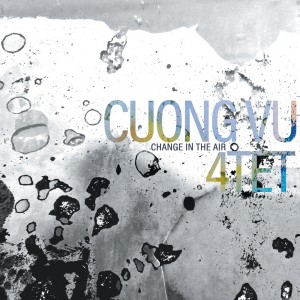 Trumpeter Cuong Vu likes the sound of guitar. Not just the tasteful purr of an under-amplified archtop; Vu also relishes the snarl and bite of the guitar’s most electric aspects. For many jazz fans, that became clear with 2016’s Cuong Vu Trio Meets Pat Metheny (Nonesuch), but it’s Vu’s work with Bill Frisell in his current 4tet that truly drives the point home.

Change In The Air, the ensemble’s sophomore effort, is nothing if not a testament to the plasticity of both the group and Frisell’s electric palette. Things start off placidly enough with “All That’s Left Of Me Is You,” a wistful number by drummer Ted Poor that plays like a long-forgotten standard, with Frisell dutifully coloring within the lines while Vu evokes the lyric brilliance of Art Farmer’s late period. But things turn darker with the bluesy “Alive” (another Poor composition), with Vu digging into a rockish pulse, kicked up by Poor and bassist Luke Bergman while Frisell’s solo starts with pinging, feedback-tinged harmonics, and gets louder from there.

The 4tet maintains that balancing act for the bulk of the album, at times hewing close to mainstream jazz verities, at others tumbling gleefully into the melodic uplift of guitar rock. Except, of course, that neither extreme is quite that simple. Bergman’s “Must Concentrate” is easily the most pop-friendly number here; despite Frisell cranking it for some truly majestic power chords, the playing is still too smart to sound dumb. Likewise, Vu’s twitchy “The March Of The Owl And The Bat” is sufficiently rhythmically gnarled to make credible his claim that it was inspired by extreme metal band Meshuggah. But c’mon—nobody’s going to mosh to this.

Instead, what Vu, Frisell, Bergman and Poor do is repurpose the forms of jazz and rock to maximize their creative potential. That’s why the most satisfying track here might be “Round And Round (Back Around),” which blurs the line between composed and improvised music so completely that it’s hard not to be awed by the 4tet’s creativity.