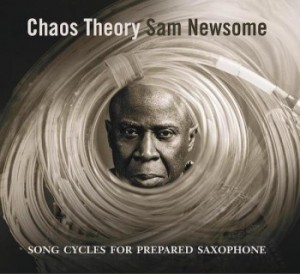 In the seven decades since John Cage’s “Sonatas And Interludes” instructed pianists to “prepare” their instrument by placing screws, coins, pencils and other objects on the instrumnent’s strings, prepared piano has become a common enough concept that it even has leaked into the realm of rock music.

By contrast, Sam Newsome’s prepared saxophone, though it clearly takes inspiration from Cage’s approach, involves a whole other level of invention and virtuosity. Head over to his blog, and you’ll not only hear but see him alter the sound of his soprano in a variety of mind-bending ways, from inserting a noise maker into the neck, to adding lengths of plastic tubing between the mouthpiece and body of the horn. The clip where he stretches a deflated balloon across the bell and plays his horn like a bata drum is particularly brilliant.

Chaos Theory: Song Cycles For Prepared Saxophone applies these and other techniques to create multitracked soundscapes that will forever alter your understanding of what sounds a saxophone can make. Comparisons to Colin Stetson seem inevitable, but Newsome is working with a much broader palette, and to a different compositional purpose.

Despite the title’s promise of chaos, Newsome’s song cycle maintains a fairly conventional sense of melodic logic and rhythmic consistency. Although some tunes—such as “Chaos Theory, No. 2 (Hiss-ology)” or “Solo, No. 3 (Flutter-Effect)”—largely are built around specific techniques, other tracks layer a range of preparations to create rich and inventive soundscapes. “Sonic Polarity,” for example, is built over a percussive ostinato and didgeridoo-like drone that lends a sort of Persian classical feel to Newsome’s improvisations, while “Bubble Mute Boogie” builds off a prepared percussive pattern to create an addictively sweet blues groove. I can’t wait to hear what other possibilities Newsome discovers as he dives deeper into his preparations.