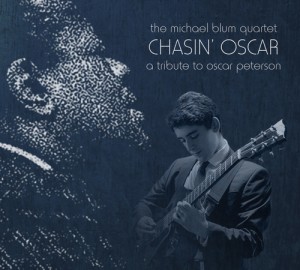 Only 23 years old, guitarist, vocalist and composer Michael Blum is someone the jazz community should keep an eye on. He has already received important recognition, topping the Rising Star—Guitar category in the DownBeat Critics Poll last year, a distinction he earned by a wide margin.

That Blum can play the heck out of his hollow-body electric (a Gibson L-5 Studio, to be exact) is obvious. He has the enviable and rare combination of technique and taste. He can dazzle with his clean runs and inventive improvisation without giving the impression of showing off.

That comes from apparent maturity beyond his years, which in turn probably came from bassist Jim Stinnett, Blum’s teacher and mentor at Berklee College of Music. The teacher is a member of the student’s band on this album, and in fact, Stinnett also contributes two original songs. One of them, “Whisper,” is deep and exotic, the most modern piece on the album. Teacher and student collaborate beautifully here.

A definite example of Blum’s maturity and imagination is his approach to the album’s programming. He decided to try to adhere as closely as he could to the style of piano giant Oscar Peterson throughout the project. The guitarist opens with a Peterson tune, “Nightingale,” and indeed Blum plays plenty of OP-like passages and a wonderful melody.

Blum must favor Brazilian music, too, for there are several bossa-nova and samba numbers among the nine songs, the best being a fast-paced “Tristeza.” However, he wasted a track by doing “The Girl from Ipanema,” a song effectively “owned” by Getz and Gilberto.

Then there’s Blum the singer. His voice is listenable and in tune, but rather indistinctive stylistically. He probably should keep working on those vocals, but he’s got a big head start on the guitar.