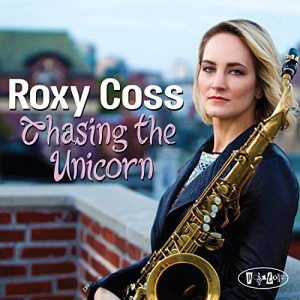 On her third outing as a leader, multi-reedist and composer Roxy Coss makes a major step as a musician and artist. Playing soprano and tenor saxophones on this date, Coss proves to be terrific on both horns, each giving her a different voice upon which to build. She plays a leaping, lilting soprano on the title track of this 11-song set, evoking a winsome journey to find the illusive, or unfindable. Next up, she digs into Joe Henderson’s “A Shade Of Jade,” offering a gritty tenor take on this terrific uptempo shaker. On both horns, Coss demonstrates a tremendously lyrical approach that entertains and inspires, whether on pop standards like the Beatles’ “Oh! Darling” and Willie Nelson’s “Crazy,” or via her wispy, low-end tenor sound on Wayne Shorter’s “Virgo.” Coss brings a cool, modern vibe to the proceedings with Lionel Loueke’s “Benny’s Tune,” but she’s also an accomplished composer. Tunes like “You’re There,” “Free To Be,” “Endless Cycle” and “Never Enough” slide beautifully into this set. And her band for this date—pianist Glenn Zaleski, guitarist Alex Wintz, bassist Rick Rosato and drummer Jimmy Macbride—lay it down with grace and a little grease. Zaleski serves as a terrific front-line foil on tunes like “You’re There.” He is a pianist of great touch and taste. Rosato grooves hard throughout the set, driven by Macbride’s dynamic beats. Coss notes that the imagery of chasing the unicorn signifies a choice—to pursue your dreams or stay within the boundaries of your fears. Here, there’s no question: Coss is going after her dream.