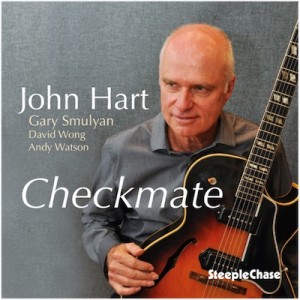 Guitarist John Hart, a celebrated sideman who first gained recognition for his work with Jack McDuff, has always had an attractive sound and a creative style that falls within jazz’s modern mainstream. Hart has also led his own sessions since 1988’s One Down (Blue Note), and he wrote most of the six originals on this new set with baritonist Gary Smulyan, bassist David Wong and drummer Andy Watson in mind.

“123 Blues” starts off the program with a simple riff and an eight-bar break that launches Hart’s guitar solo. While his thoughtful approach is somewhat reminiscent of Jim Hall, Hart displays his own musical personality throughout the project. “Power Of Three” is a lightly swinging jazz waltz that precedes a melodic guitar-baritone duet on “Everything Happens To Me.” Hart reharmonizes “Night And Day” while keeping it a swinger, engages in close interplay with Smulyan on “Bittersweet” and takes an excellent chordal solo on “Isn’t It Romantic.” The enjoyable set concludes with an uptempo exploration of “Rhythm” changes on “Right To Lie,” an original with a tongue-twister melody and a guitar solo that almost takes the music outside at one point.