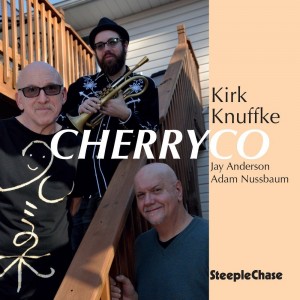 Given cornetist Kirk Knuffke’s nonchalant versatility and ebullient melodic gifts, it should come as no surprise that he’s an admirer of the great Don Cherry. Naturally, he came to Cherry through the music of Ornette Coleman, but Cherry’s inherent curiosity is more than worthy of its own focus, and even though Knuffke’s repertoire on this terriffic outing includes five indelible Coleman themes from 1958–’59, such as “Lonely Woman” and “The Sphinx,” the trio setting leaves no doubt who the cornetist is thinking about. He gets spry, limber support from the excellent rhythm section of bassist Jay Anderson and drummer Adam Nussbaum.

Occupying the front line with only a cornet is no easy task—especially on music that was so famously shaped by a duo—but Knuffke nails it, conveying the melodic content of these super catchy themes without a hiccup, wielding his plush, tensile tone like it was molding clay. It helps that Anderson and Nussbaum expertly fill out the sound held for him.

Knuffke doesn’t imitate Cherry in the slightest; his agile smears and muscular sallies on “The Sphinx,” for example, sound bigger, while his navigation of “Art Deco” conveys more swagger and sass than its composer’s own tart, modest performances. What comes through in the end is a shared spirit of generosity and the durability of Cherry’s writing. Knuffke might be more of a technician than Cherry, but here he puts the emphasis on ensemble interplay, forming an airy, malleable bond with his deft rhythm team while still uncorking one convincing and lyric solo after another. Cherryco feels like a love letter and it’s hard not to share in the ardor.