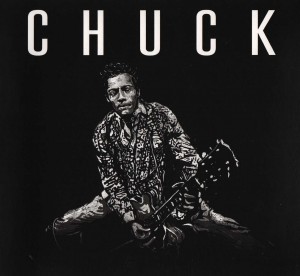 There are few moments in music more exhilarating than Chuck Berry’s searing lead riff on “Johnny B. Goode” and “Sweet Little Sixteen.” Probably no song in the history of rock blends lyrics and music more deftly and cannily than “Maybellene” and “Memphis.” Berry followed his peripatetic musical spirit almost up until the day he died on March 18, 2017, at age 90. The 10 songs on Chuck—the album he was working on with family and friends before he died—showcase his wide-ranging guitar versatility, his still-powerful vocals and his nimble way with a crafty song lyric.

The jaunty, choogling “Wonderful Woman” launches Chuck with the steady driving rhythm of Berry’s guitar; his son and grandson, along with bluesman Gary Clark Jr., join Berry on guitar. Berry opens the song with his blues growl, and the guitars then take off at lightning speed on a jam that celebrates the beauty of women and the heartache of loving them. “Big Boys,” which features Nathaniel Rateliff on vocals and Tom Morello on guitar, rockets off with a typical Berry guitar riff and never slows down.

Chuck fittingly celebrates and preserves the legacy of the father of rock ’n’ roll.