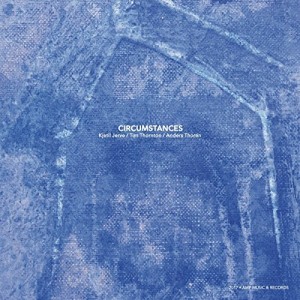 Norwegian pianist Kjetil Jerve is a prolific artist whose website cites 10 bands in which he plays, and that list isn’t even complete. His trio with British bassist Tim Thornton and Swedish drummer Anders Thorén had only played one concert together when the musicians went into the studio for a two-hour session that generated the compelling album Circumstances. The program is an intriguing mixture of structured sections and adventurous flights of improvisation. The title track, which is a collective composition credited to all three players, conveys a sense of quest. The rest of the program includes three compositions by Jerve and two by Thornton, as well as freewheeling interpretations of songs by Cole Porter (“Everything I Love”), Bill Evans (“Time Remembered”) and Allan Holdsworth (“54 Duncan Terrace,” which the guitarist recorded with pianist Gordon Beck on the 1988 album With A Heart In My Song). The overall vibe of this album is one of three consummate professionals seeing where the journey leads. A drum solo by Thorén on “Deadeye” and a bass solo by Thornton on “438” demonstrate the players’ chops and Jerve’s willingness to share the spotlight. On Thornton’s tune “Passengers” and on Jerve’s “Deadeye,” in particular, the pianist’s gift for melody and propulsion are complemented by his bandmates’ sense of drama. Jerve—who recently recorded an album with tenor saxophonist Jimmy Halperin and bassist Drew Gress—will, in February, embark on a tour of Japan, where he’ll play solo, as well as with various ensembles.