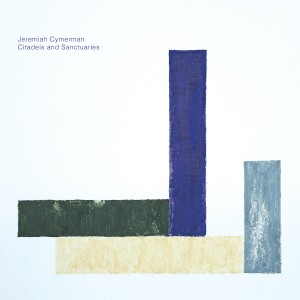 The New York-based clarinetist and sound engineer Jeremiah Cymerman operates at the edge of genres. His recordings include improvisations with Nate Wooley and Evan Parker, electro-acoustic creations of painstaking post-production, and, most recently, a set of darkly lyrical instrumentals performed with avant-rock multi-instrumentalist Charlie Looker.

Cymerman recently turned 40, and Citadels & Sanctuaries shows the reflection of someone reaching a landmark. It was made during a studio residency at Pioneer Works, which allowed Cymerman to integrate his approaches. The heart of the album is a single take, performed on clarinet, which let him explore melodic development to a greater degree. But each performance has been transformed by overdubbed synthesizer drones and percussive accents, as well as electronic interventions. On “Spheres Of Humanity (For Alvin Lucier),” for example, he pushes long tones and intakes of breath far into the red. They seem to harmonize with an overdubbed jolt.

Each track honors an artist who has inspired or assisted Cymerman. The shifts in timbre and grain and the hall-of-mirrors echo treatments on “Conscious Faith (For Evan Parker)” can be related to the dedicatee’s own work with little trouble. But the connection between “From The Metaphysical To The Transcendental (For Bill Smith)” and the late clarinetist’s own work is more abstract. Still, Cymerman’s melancholy lead line speaks volumes for his sadness over Smith’s passing early in 2020.

Citadels & Sanctuaries: From The Metaphysical To The Transcendental (For Bill Smith); Spheres Of Humanity (For Alvin Lucier); The Absolute And Its Tearing (For Horatio Radulescu); Broken Language (For Morton Feldman); Between Always And Forever (For Toru Takemitsu); Knot Of Breath (For Mario Diaz de Léon); For As Long As Grass Grows (For Tony Scott); With The Old Breed (For Nate Wooley); Manifesto (For Iancu Dumitrescu); Conscious Faith (For Evan Parker). (47:09)
Personnel: Jeremiah Cymerman, clarinet, synthesizer, electronics, percussion.
Ordering Info: 5049records.com