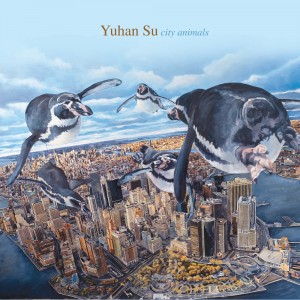 Having worked with both Brian Krock’s Big Heart Machine and Miho Hazama’s m_unit, vibraphonist Yuhan Su collects a quintet for City Animals, a follow-up to 2016’s Virginia Woolf-referencing A Room Of One’s Own (Inner Circle).

Exploring ideas that spring from Su’s experiences on the road and as a ballet accompanist, the title track embodies the bandleader’s engagement with New York, after arriving there in 2012 as a Berklee College of Music graduate. Dispensing bursts of notes to aurally capture the city’s mood, alto saxophonist Alex LoRe serves as a character in Su’s story; her vibes seem to portray Su gamboling through New York as drummer Nathan Ellman-Bell’s thrum reflects the city’s non-stop energy. Some of the rock-styled drumming on “Viaje” might roil purists, but the stylistic inclusion points toward the unending dialogue among jazz-world players, and diverse and personal influences. Of course, the rockist drumming endures only at brief interludes, as Su’s discordant harmonies with LoRe and trumpeter Matt Holman carry the following track, “Feet Dance.”

But it’s the three-part Kuafu suite that expands Su’s storytelling ambitions, as the bandleader reels off a skittering opening portion for “I. Rising” that might mirror the Chinese myth’s giant chasing after the sun. It’s followed by a sleepy nocturne, “II. Starry, Starry Night,” when the story’s namesake protagonist takes a break from his impossible task, and “III. Parallel Chasing,” still vibrant and bouncy, detailing the giant’s continued pursuit. Su, too, still is pursuing a goal, and as “Party 2AM” weaves in and out of three-part harmonies, listeners get the sense that she’s only written the first few chapters of her unfolding tale.