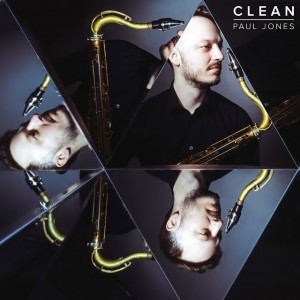 Tenor saxophonist Paul Jones has been developing a brainy compositional method in his quest for musical innovation, one that has helped distinguish his writing since the 2015 release of his debut, Short History (Blujazz). In creating his latest album, Clean (Outside In Music), Jones has taken this system—based on assigning musical tones to letters of the alphabet and composing melodic material based on words and phrases—to another level, one that involves a random number generator. The result is a program of compelling and surprisingly warm music. Jones’ approach is in many ways minimalist, building on techniques used by Philip Glass and Steve Reich. But the gently hypnotic musical lines that are repeated throughout his compositions are balanced with straightahead jazz instincts and riveting, extroverted improvisations—a highly original combination that soothes and excites at the same time. Jones has crafted unique arrangements for this fresh material, selectively adding a virtual chamber orchestra to his New York-based sextet, which includes alto saxophonist Alex LoRe, guitarist Matt Davis, pianist Glenn Zaleski, bassist Johannes Felscher and drummer Jimmy Macbride. Additional musicians joining the group on several tracks include Mark Dover on clarinet, Ellen Hindson on oboe, Nanci Belmont on bassoon and Susan Mandel on cello, plus SNAP Saxophone Quartet members Nicholas Biello (soprano), Andrew Gould (alto), Sam Dillon (tenor) and Jay Rattman (bari), as well as The Righteous Girls: Gina Izzo (flute) and Erika Dohi (piano). These instruments come together in various intriguing ways on Clean, often on the short transitional passages that contribute to the album’s narrative feel, and sometimes serving as extra ensemble voices on the longer, more fleshed-out compositions. Listen to the wide palette of timbres that emerge as various instruments pair up on the chamber-worthy “Alphabet Soup,” with bassoon and cello alternating the roles of bass-line provider. Notice how on the easy-swinging “I Am An American,” the theme is stated at the top by piano and pizzicato bass, then is repeated by tenor sax and guitar. Hear how the bass part on “Hola, Amigo” sounds as if it’s being tripled by bassoon, cello and piano. And just try to keep your mind from blowing when you realize that the pianist is simultaneously doubling the bassoon line in his left hand and a saxophone line in the right on “Buckley Vs. Vidal.” Throughout the program, Jones solos with confidence and poise, executing complex ideas with eloquence and wailing with bluesy passion. I was first impressed with Jones’ go-for-the-throat blowing when he was a finalist in the Julius Keilwerth Co.’s 2014 Saxophone Idol competition. Now, with the release of Clean—which brings together his jazz, classical and pop influences—I find myself fascinated with every aspect of this ascending bandleader’s musicianship. Indeed, Clean is an inspired work of art with an organic flow that belies its heady origins.