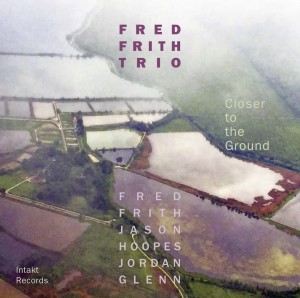 Meta-musician and guitarist Fred Frith has been juggling disparate concerns for decades, moving from one project to another to tackle specific ideas. He pioneered a distinctly British take on progressive rock in Henry Cow back in the 1970s, applied improvisational impulses to art songs with cellist Tom Cora (and later, harpist Zeena Parkins) in Skeleton Crew, engaged in bracing free improvisation with John Zorn and composed for new music ensembles like ROVA and Ensemble Modern, among others.

He’s found simpatico collaborators in drummer Jordan Glenn and bassist Jason Hoopes—like Frith they live in the San Francisco Bay Area, where the guitarist long has taught at Mills College, an academic environment that’s helped foster experimental music in the States. Together, they’ve formed a scrappy improvising trio that deftly enfolds many of the leader’s long-term musical concerns into a gritty, unified attack. On the group’s second album, its groove-oriented improvisations draw upon the energy of rock music, with each standalone piece flowing into the next. The rhythm section builds muscular, yet tensile, armatures for Frith to extrapolate over, shaping movements that glide and stutter in equal measure. Despite the unstinting propulsion, Glenn and Hoopes constantly are shape-shifting, with the intensity and density of their machinations steadily transforming, usually in lockstep with the leader’s colorful sound splatter.

On the album opener, “Bones To Pick With Graveyards,” the trio immediately establishes a broad-minded modus operandi, as Frith’s pedal-driven mastery splinters his lines into a variegated spray of post-dub pointillism, terse melodic jabs and rhythmically exciting patterns that mutate in some kind of organic process where nothing ever repeats. Simultaneously, Hoopes and Glenn do much more than treat time like putty, as their sometimes slithery, sometimes punishing output frequently serves up tuneful counterpoint to the guitarist. On “In The Grip Of It,” the rhythm section embraces a far more visceral drive, stomping out a massive, lumbering lope somewhere between doom and the fractal beats of Autechre.

“Stars Like Trees” veers toward harrowing ambience, as the guitarist unleashes dense, richly atmospheric shards of sound that hover and billow like viscous clouds, as the drummer toggles between silence and spastic, electronically treated rim-shot patterns, and the bassist injects a few low-end jabs between extended washes of atmospheric muck.

While melodic patterns constantly dot these turbulent soundscapes, the trio ultimately is more interested in exploring the nexus of groove and mood, although it consistently refuses to settle into any one spot for more than a few bars; the sense of movement is mirrored by that hearty musical impatience.

Closer To The Ground: Bones To Pick With Graveyards; Alle Planmässigen Ziele Werden Erreicht; In The Grip Of It; Ruhebereich; Stars Like Trees; A Path Made By Walking; Betting On The World; Love And Other Embers; Up In Smoke. (51:03)
Personnel: Fred Frith, electric guitar, organ; Jason Hoopes, electric bass, double bass; Jordan Glenn, drums, percussion.