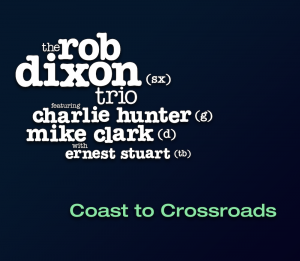 Being based at various times throughout his career in Atlanta, New York and Indianapolis likely has strengthened Rob Dixon’s silvery tone on alto and tenor saxophone.

On Coast To Crossroads, an album that deals with the bandleader’s travels, he’s joined by Headhunters’ drummer Mike Clark, guitarist Charlie Hunter and trombonist Ernest Stuart, each contributing a dose of funky congeniality to this 11-track album. Dixon’s previous work with both Clark and Hunter make what already would have been a recording stacked with lustrous moments an even more easy-grooving clutch of music.

“Memphis Bus Stop,” a composition prompted by Dixon’s stopover during a trip from New York to San Antonio, Texas, finds Hunter gently comping on his 7-string guitar, while Dixon and Stuart purr out the tune’s melodic material. It’s a bed of music, gently pushed forward by Clark’s uncomplicated work behind the kit, granting Dixon space to spin his travelogue. The troupe shuttles out to the West Coast on Tupac’s “California Dreaming,” before getting the “Flat Tire Blues” and eventually speeding off at “87 MPH.”

With his work as an educator and role as artistic director of the Indy Jazz Jest, the fact that Dixon finds the time and desire to issue work with this sort of narrative thread and unhurried finesse should show the world that the Midwest has stars of its own.