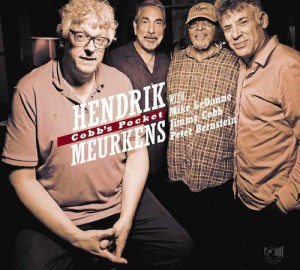 What happens when an art form’s foremost practitioner dies? When harmonica legend Toots Thielemans passed away in 2016, fans around the globe asked, “Who will carry the mantle?” The responsibility for extending the jazz-harmonica tradition has fallen to various players, including Grégoire Maret, Howard Levy and Hendrik Meurkens, a native of Hamburg who now is based in New York.

Meurkens, also acclaimed as a vibraphonist, sticks to the harmonica on his new album, Cobb’s Pocket. He composed the title track in honor of the drummer on this quartet project, Jimmy Cobb, now 90 years old. The other players on this album are straightahead masters with a long shared history: Guitarist Peter Bernstein and organist Mike LeDonne frequently collaborate in the latter’s Groover Quartet. The new album marks the third time that Meurkens has recruited Cobb for one of his leader dates, but the first time that the harmonicist has recorded with an organ trio. The results are deeply satisfying.

Meurkens’ elegant rendition of Slide Hampton’s “Frame For The Blues” features the type of tenderness that made Thielemans an icon, while LeDonne and Bernstein each offer solos that propel the musical narrative without lapsing into grandstanding. Meurkens’ solo on the title track is a master class on crafting melodic lines and colorful shading with a harmonica, demonstrating that in the right hands, the instrument can rival the trumpet or saxophone in terms of musical intricacy and emotional impact. Throughout the album, just as one would expect, Cobb’s playing is consistently tasteful, as he builds the sonic pocket that is celebrated in the title track.

The program leans heavily on standards but also includes three Meurkens originals, including one of his most famous compositions, the oft-recorded “Slidin’.” The album opens with a strong dose of swing and groove via “Driftin’,” which appeared on Herbie Hancock’s 1962 debut, Takin’ Off. Meurkens decided to include an interpretation of “Unit 7,” partially because Cobb had recorded a rendition of the Sam Jones composition in 1965 alongside bassist Paul Chambers, pianist Wynton Kelly and guitarist Wes Montgomery on the album Smokin’ At The Half Note.

“Polka Dots And Moonbeams” is one of the most frequently recorded standards in history, with a lengthy line of interpreters that includes Frank Sinatra, Sarah Vaughan, Dexter Gordon, John Denver and Bob Dylan. Although it has been recorded hundreds of times, Meurkens brings something fresh to the tune, thanks to his command of an instrument not frequently found on the jazz bandstand.