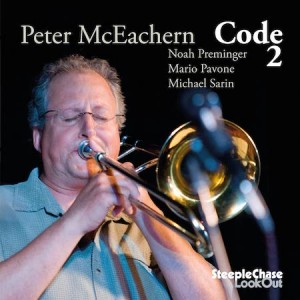 Trombonist Peter McEachern has worked with bassist Mario Pavone since the early ’80s, and drummer Michael Sarin since the early ’90s. The three recorded as a trio on 2018’s Bone Code, and on this album, they’ve invited saxophonist Noah Preminger to the party.

The compositions often dwell in the chordless zone, but McEachern’s trombone has a deep New Orleans blues feel. The unison melodies are performed with precision, but afterward the two horns go their separate ways. For most of its running time, this is effectively a trio record, with either tenor or trombone leading. Preminger plays with a keening tone and has a thoughtful way of phrasing.

McEachern may be the only musician to have worked with both minimalist composer La Monte Young and blues guitarist Clarence “Gatemouth” Brown. He’s capable of getting as abstract and cerebral as you like, but is just as happy to stick his feet in the mud, and his sound stays big, no matter how quietly he’s playing; it’s an astonishing display of control backed by real emotion.