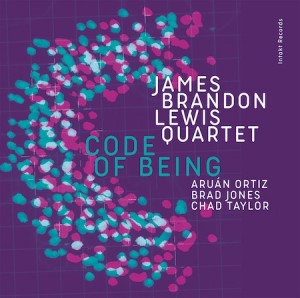 Code Of Being is James Brandon Lewis’ second recording with his “Molecular” quartet (pianist Aruán Ortiz, bassist Brad Jones and drummer Chad Taylor) — for which the tenor saxophonist writes in a system based on biological cell processes. The album also mines his interest in African American visual artists. Puting that aside, what matters is that Code Of Being features some of Lewis’ most beautiful music.

In fact, it opens with the absolutely exquisite “Resonance,” a wistful, pondering tune that works itself into a pugilistic, M-Base-like attack. If the rest of the album never quite equals that zenith, it comes close. “Every Atom Glows” is a haunting ballad featuring the leader, though a suspenseful Jones solo might be its finest moment. The title track and “Where Is Hella” constitute back-to-back dramatic episodes.

Two tracks, “Per 4” and “Per 5,” share a description in Lewis’ notes: “the rhythmic explorations of my Molecular Systematic Music inspired by circadian rhythms in biological cells.” Only the first, though, sounds like a mathematical experiment. It starts as a winding solo, and though the others (especially Taylor) eventually bring in some rhythmic energy, melodically it falls into a rut. “Per 5,” on the other hand, is compelling, with Lewis and Ortiz playing scampering counterpoint over an insistent 6/8 groove from Jones and Taylor.

None of this is to say that the cerebral components of Lewis’ art aren’t fascinating. Certainly “Every Atom Glows” will push one to find the eponymous painting by Norman Lewis. But enjoy the tune, and the album, for its pure musical glory first and foremost.