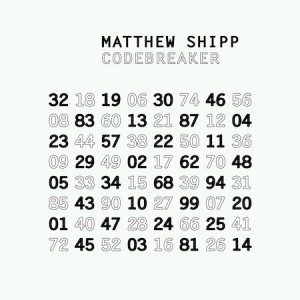 Ever prolific, Matthew Shipp has only gotten moreso in recent years. Codebreaker is the eighth CD with his name on the front to be released in 2021, and his third solo piano album in just 18 months. This torrent of music invites the listener to regard any individual effort as being something like a single star in the universe, simultaneously miniscule part of a whole and the locus of immense variety and activity.

Arrayed against Shipp’s vast catalog, the recording definitely possesses a character of its own. In recent times, he has described his approach to the piano as “vibrational,” and while his intent is to express his music’s relationship to the cosmos, the term can also be taken quite literally in this case. There are moments across Codebreaker when one can sense the instrument’s timber shivering as sustained notes engage in a dialogue with tones that fade more quickly.

Other exchanges manifest, as Shipp’s right hand draws a line away from a piece’s structure and then returns to it, or as the listener considers the interaction between Mia Hansford’s poetic, track-by-track notes and Shipp’s piano playing.

And yet, this web of crosstalk imparts a sense of solidity. The record’s 11 tracks, each succinct and complete, project a common character. Not only is the music instantly identifiable as Shipp’s, it has a unifying feeling of focused reflection. This music isn’t a stream of consciousness, but a series of abstract musical thoughts crystalized into a sequence. You might listen to this album over and over, pondering its code; but you’ll know from the first that Shipp is in tune with his codebook’s contents.