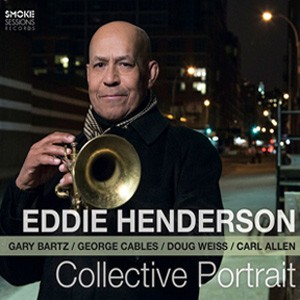 Eddie Henderson was a formidable presence in San Francisco’s thriving fusion scene in the 1970s. Known back then as “Dr. Trumpet” (he worked part-time as a psychiatrist when not on tour with the likes of Herbie Hancock and Art Blakey), Henderson has long since given up his medical practice, but he hasn’t finished experimenting. On Collective Portrait, the fiery-toned trumpeter revisits 10 fusion classics in an intimate, small-ensemble setting. By removing these tunes from their familiar context, the musicians—Gary Bartz on alto saxophone, George Cables on piano and Fender Rhodes, Doug Weiss on bass and Carl Allen on drums—are able to freely explore the melodic aspects of the material. This is no easy task because fusion, with its high-energy vamps and complex melodies, almost beckons for electronic enhancement. But here, Henderson and his crew provide all the power needed. A new version of Cables’ “Morning Song,” originally recorded in 1979 with electric piano and electric bass, sustains a groove courtesy of Weiss’ upright acoustic bass and Cables’ bouncy left-hand piano line. On the Woody Shaw tune “Zoltan,” it’s Allen who serves as band’s dynamo, weaving together three distinct rhythms with equal poise: a rat-a-tat shuffle, a Latin-funk groove and straightahead swing. Solo turns by each of the members provide another jolt of energy. Henderson’s take on “Beyond Forever” finds the one-time hard-bopper leaping through the upper registers of his horn, and Bartz’s blend of bebop and modal idioms on “Gingerbread Boy” floats effortlessly atop the tune’s driving swing feel. Even the album’s slower tracks—the ballads “You Know I Care,” “Together” and “Spring”—are brimming with energy, though on a quieter, more refined scale. With Collective Portrait, Henderson demonstrates that in the right hands, and with the right touch, any song can become timeless.