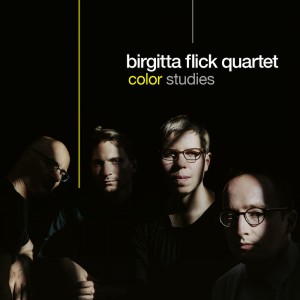 If the color studies referenced by saxophonist Birgitta Flick on her third quartet album were to be conceptualized, they would make up a mottled, impressionist canvas. The brushstrokes—or instrumental detail—fade into one another with infinite intricacy and subtly emotive touches. Yet, no overarching theme emerges.

While 2013’s Yinying was a pensive, melody-driven work reminiscent of Sweden’s Esbjorn Svensson, and 2016’s Dalarna a wintry mood piece, Color Studies takes on a warmer aspect. “Grey” clatters through a descending line, softly played by Flick, while pianist Andreas Schmidt counters with forceful chords beneath drummer Max Andrzejewski’s polyrhythmic touches. Feeding into the “studies” designation of the title, many compositions are doubled, returned to and re-evaluated: two versions of Bach’s “Sarabande” and “Gespenster.” Ultimately, these returns lead to Color Studies feeling fragmentary. There are seeds of song-length ideas in “Kor” and “Ludus,” so perhaps with fewer colors in her palette, Flick would allow compositions like “Yellow Room” to shine, rather than be overwhelmed.