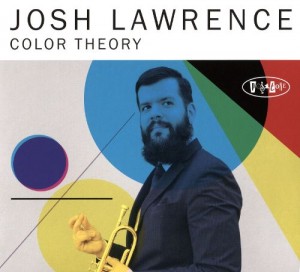 Hailing from Philadelphia, trumpeter Josh Lawrence has established himself as a preeminent voice among young composers. He is a member of the Fresh Cut Orchestra, one of the funkiest, most compelling large ensembles to emerge from the City of Brotherly Love in a while. He’s also a faculty member for the city’s Drexel University and Kimmel Center Creative Music Program, where he teaches classes on harmony, collective composition and ensemble interaction. Groove and theory intertwine tightly on his latest album, which takes the color spectrum as its locus of inspiration but slides just as easily into sonic meditations on love and longing. “Yellow,” which opens the album, functions much like a vignette. Clocking in at just over a minute, it’s a statement of indeterminate emotion; one can read either steely determination or aching solitude into its mysterious cries. Either way, it stands in stark contrast to the follow-up “Presence,” a bruising hard-bopper that features stellar interplay between Lawrence and his frontline partner, saxophonist Caleb Curtis. “RED!” comes close to matching that intensity, courtesy of some explosive drumming by Anwar Marshall and a brilliantly sculpted solo by pianist Orrin Evans, with whom Lawrence plays in the Captain Black Orchestra. “Green” and “Blue” dial the intensity down into the mellow zone, with keyboardist Adam Faulk contributing a fuzzy Rhodes sound, while “Black” and “Purple (4 Prince)” inhabit deeper, smokier vibes. Equally slow-burning are “The Ripoff” and “The Conceptualizer,” which layer silky trumpet-sax harmonies over mounds of punchy bass. Closer “On The Yangtze” brings the album full circle, its sparse arrangement allowing plenty of room for listeners to color in their own emotions.